The Commissioners are pleased that after several months the repairs to the edge of pavement railings and adjacent limestone wall have been completed. The manufacture of the new railings has enable an additional handrail for the steps to be included. This has made  access to the memorial itself much safer.

The Commissioners take their responsibilty for the mainentance of memorial very seriously. Last year prevenative repairs to the cross were made to stop further facturing of the stone. This was carried out as a result of  recommendations received  after an extensive  survey by structural engineeners.  Ways to further enhance the area are being considered and investigated.

The memorial was unveiled on Wednesday 18 July 1923 by the Lieutenant Governor Sir W. Fry. It was dedicated by the Vicar of Malew.
The memorial was designed by P.M.C. Kermode. It was carved from limestone by Mr W. Kissack, of Scarlett, assisted by Mr C.H. Cubbon, stone mason, of Castletown. 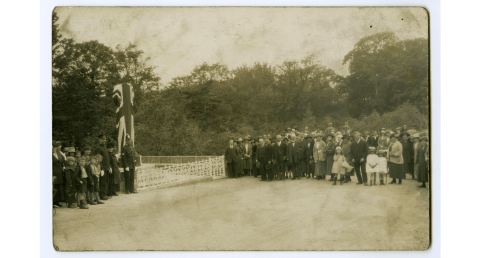 The schedule for collections of grass and paper for the coming year is  avaliable by clicking  here.

Malew Commissioners are pleased to announce that the Board has unanimously agreed to keep the rate at 175p for the coming financial year.

From Monday 12th September applicants seeking Public Sector Housing in the south of the island will have access to a much wider choice of properties than ever before as a Combined Housing Waiting List for the Southern Region is launched.

The Combined List, which has also been offered to all existing applicants, unlocks the opportunity for applicants to have a choice of housing from over 1,000 properties across the Local Authority areas of Port Erin, Castletown, Rushen and Malew, together with the Department of Infrastructure (DoI) housing in the southern parish areas. This will help to reduce applicants waiting time on the housing lists as they will now be considered for housing across the four Housing Authority areas and DoI rather than just one area, as was previously the case. This has been achieved by partnership working between the Local Authorities and the Department of Infrastructure.

From Monday applicants will be able to submit their Housing Application Form by post or by hand to any of Arbory, Castletown, Malew, Port Erin, Rushen and Santon or Department of Infrastructure Housing Division who will process the application according to the applicant’s choice of area.

‘Early feedback from existing and prospective applicants has been very positive. Following an earlier press release we’ve seen an upturn in the number of new applicants wishing to be housed in areas where they previously were unable to be considered for, as well as a number of applicants wishing to transfer from other housing waiting lists in order to take advantage of the wider choice which will now be available for them’.

The Combined Application form and an FAQ sheet can be downloaded from any of Castletown, Port Erin, or the Department of Infrastructure Housing Division websites and will pilot initially for a period of 3 months.

The application form can be downloaded here: http://www.porterin.gov.im/housing

Issued on behalf of the Southern Area Housing Working Group on 12th September 2016.

As part of its ongoing review of service provision, the Department of Infrastructure Housing Division and Public Sector Housing providers in the South of the island have formed a Southern Area Housing Working Group to work closely together in order to investigate, modernise and improve service delivery of Housing.

One of the initiatives being explored by the Group is that of a Shared Waiting List and Shared Allocations, meaning that in the future applicants may have considerably more choice over the number, location and type of property available to them.

During the initial stage of this review, each of the aforementioned Housing providers in the South will be writing to applicants held on their respective Waiting Lists during the week of 15th February to explain how this will be conducted.

Another aspect the Group is actively exploring is opportunities within the procurement of repairs and maintenance of the housing stock of more than 1,350 dwellings within the South.