Malew Commissioners are pleased to announce that the Board has unanimously agreed to keep the rate at 175p for the coming financial year.

From Monday 12th September applicants seeking Public Sector Housing in the south of the island will have access to a much wider choice of properties than ever before as a Combined Housing Waiting List for the Southern Region is launched.

The Combined List, which has also been offered to all existing applicants, unlocks the opportunity for applicants to have a choice of housing from over 1,000 properties across the Local Authority areas of Port Erin, Castletown, Rushen and Malew, together with the Department of Infrastructure (DoI) housing in the southern parish areas. This will help to reduce applicants waiting time on the housing lists as they will now be considered for housing across the four Housing Authority areas and DoI rather than just one area, as was previously the case. This has been achieved by partnership working between the Local Authorities and the Department of Infrastructure.

From Monday applicants will be able to submit their Housing Application Form by post or by hand to any of Arbory, Castletown, Malew, Port Erin, Rushen and Santon or Department of Infrastructure Housing Division who will process the application according to the applicant’s choice of area.

‘Early feedback from existing and prospective applicants has been very positive. Following an earlier press release we’ve seen an upturn in the number of new applicants wishing to be housed in areas where they previously were unable to be considered for, as well as a number of applicants wishing to transfer from other housing waiting lists in order to take advantage of the wider choice which will now be available for them’.

The Combined Application form and an FAQ sheet can be downloaded from any of Castletown, Port Erin, or the Department of Infrastructure Housing Division websites and will pilot initially for a period of 3 months.

The application form can be downloaded here: http://www.porterin.gov.im/housing

Issued on behalf of the Southern Area Housing Working Group on 12th September 2016.

As part of its ongoing review of service provision, the Department of Infrastructure Housing Division and Public Sector Housing providers in the South of the island have formed a Southern Area Housing Working Group to work closely together in order to investigate, modernise and improve service delivery of Housing.

One of the initiatives being explored by the Group is that of a Shared Waiting List and Shared Allocations, meaning that in the future applicants may have considerably more choice over the number, location and type of property available to them.

During the initial stage of this review, each of the aforementioned Housing providers in the South will be writing to applicants held on their respective Waiting Lists during the week of 15th February to explain how this will be conducted.

Another aspect the Group is actively exploring is opportunities within the procurement of repairs and maintenance of the housing stock of more than 1,350 dwellings within the South.

Malew Parish Commissioners are pleased to announce that the rates levied for the forthcoming financial year 2016/17 will remain at 175p.

It has been 10 months since the Commissioners took over the transferred services from the Department of Infrastructure. The Commissioners now have control over the road sweeping, weed spraying and hedge cutting (except for the A3 & A5) which the Board believes have been a very positive step and has resulted in programme of sweeping and spraying that hasn’t been seen for some time. A major capital project in the addition of street lighting in the Balthane Estate has been completed. This has proved to have been welcomed by the businesses and visitors of the Estate. The administration at Malew Commissioners has continued to demonstrate efficiency improvements, whilst also delivering new initiatives.

Looking forward to the next financial year we will continue with improvements to the transferred services and target those areas of need. There are changes to the structure of how Local Authorities are charged for waste and this has shown a slight increase in cost to Malew. However, it is positive that domestic waste will no longer be subject to the Waste Escalator charge which included the capital costs for providing the EfW plant which would have seen domestic waste taken to the plant being charged at around £170 per Tonne by 2018/19. Commercial waste disposal is to rise to £165 per Tonne. The contribution made by Malew to the Southern Civic Amenity Site remains unchanged.

Malew Commissioners encourage local residents to take a keen interest in our business. The updated website has attracted a large number of views since its launch in October 2015.

The Commissioners would like to remind all residents of the Local Authority General Elections that are taking place on 28th April 2016. Please ensure you are registered to vote. You can do this by calling into the Commissioners Offices.

The past year has been most challenging and The Commissioners continue to look for ways to improve operating efficiencies. You may recall that in the early part of the year the day that refuse collected was changed, this along with changes to the kerbside recycling scheme has enabled us to ensure the most efficient use of the vehicles and labour time. This has resulted in a reduction in our fuel costs and cut down on the number of trips to the Energy from Waste Plant (EfW).  Also the bring banks that are in place at Abbotswood, Clagh Vane, the Railway Station, Derbyhaven and St Marks continue to be well used. Nearly 50 tonnes of waste has been collected at these sites over the past year, reducing the amount sent to the EfW saving some £4,000 in charges.

The Isle of Man Government continues to review its functions and the services it provides. It has identified functions that it believes would be better provided at a local level by Local Authorities. These functions are road sweeping, gully cleaning, hedge cutting and weed spraying. The Commissioners have agreed to take over these responsibilities but obviously there will be costs associated with it. Although the gate fee for EfW has been frozen for a year, the net result has no benefit for the Authority.  Regrettably, we have no alternative but to increase the rates to cover these costs as, unlike some other Local Authorities, we do not hold large reserves. The increase is just over 5% and equates to approximately £15 per annum for the average ratepayer. However, we hope that there will be a noticeable improvement in the level of these services as a result.

Please remember that the Rates Demand that you receive includes amounts that are not due to the Commissioners. For example a Rates Demand for an average property last year in Ballasalla would be broken down as follows:

As you can see, the majority of your rates bill is due to Water & Sewerage Charges.

Over the coming year we hope to progress on a lighting scheme for Balthane, improvements at the Commissioners playing field ‘Keigh Keign’ and more recycling.

We do appreciate your continued support for our initiatives and sincerely hope that together we can make Malew a better and more desirable place to live.

Mrs B. A Brereton 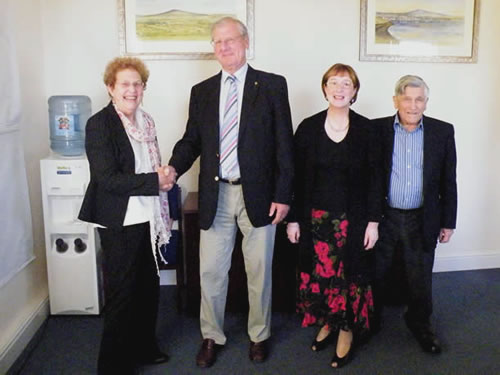 Former Commissioner Mr David Allsebrook and current Vice-Chairman Mr Bob Pilling , very kindly donated two paintings, especially commissioned, to the Parish of Malew. The paintings, by local artist, Barbara Lace, are of views of Malew, one from the bay at Derbyhaven and the other from Blackhill towards South Barrule.

The Chairman, Mrs Barbara Brereton on behalf of the authority, thanked both Mr Allsebrook and Mr Pilling for their kind generosity. The paintings have been hung in the Board Room of the Commissioners offices in Ballasalla.